Part of the Scottish Travellers series sponsored by HD Sails. 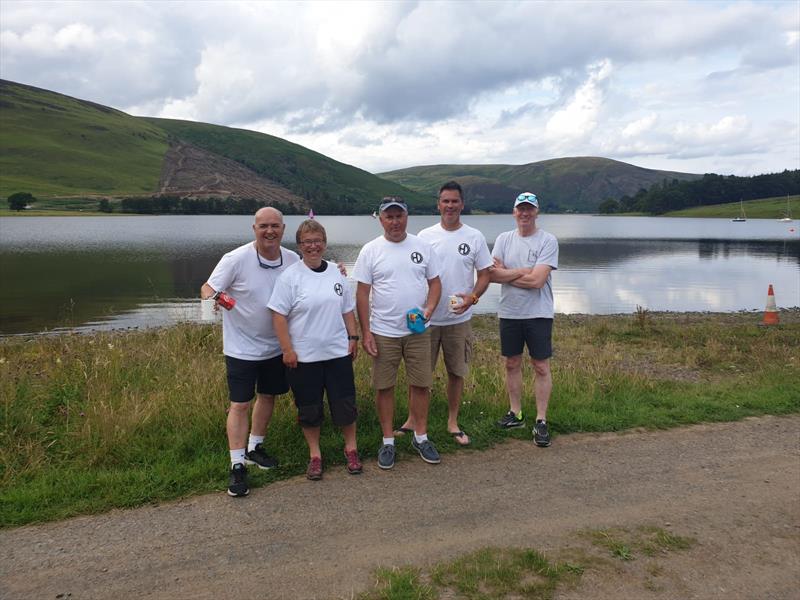 Saturday 3rd August saw the Scottish Solo fleet travel down to St Mary's Loch SC for the latest in the HD Sails travellers' series with 15 entrants. The club is situated in glorious border scenery and the journey there is equally picturesque.

Once there we were greeted with a light Westerly breeze which was a bit different to the Easterly I had been expecting. Then I noticed two closely moored boats with their bows pointing at each other and thought this could be interesting! Race officer for the day was Gerry Goodfellow who does not currently own a Solo but still has the new sail provided by HD that he won in the end of season raffle to use on his next Solo.

For the first race we had a light Easterly breeze that although shifting was not too challenging. The course was set at the far end of the loch with a 1 mile beat down to the committee boat. After a clean start visitor Ian Hopwood from Nantwich assured Ross Watson he did indeed have an overlap at the first mark of a starboard hand course and duly led round. Down the first reach Ross was passed by Stuart Gibson and Hamish McKay. Hamish was sailing the Scottish demo boat after Kevan Gibb persuaded him to sail a Solo for the first time and he showed excellent speed. On the second beat Ross sailed up the middle of the course and took the lead which he held to the finish. Kevan Gibb came through to second and Hamish stayed third. Positions were close with several boats crossing the line overlapped.

For the second race conditions looked similar at the start. Keith Milroy rounded first just ahead of Ross. Then the wind decided to turn off and it went pear shaped for the two leaders. The gentle puffs started to box the compass and it became very fluky. Stuart Gibson read the wind best down the run and gybed away from the shore with Ian Hopwood - who was talking his way through every puff of wind! These two led at the third mark. The puffs then favoured those who went high on the next reach catching out those who went low. With the fleet split in two and a big gap between the groups the race was sensibly shortened. Stuart had just managed to keep in front and was relieved that the last leg was now a fetch. He won ahead Tong King from Bassenthwaite and Hamish McKay. The two leaders at the first mark struggled home in 7th and 12th places.

After a short delay the wind seemed to steady in a more Southerly direction and a course was set but shortly before the start a shift meant the windward mark could be laid on starboard and the sequence was abandoned. The wind was now all over the place and after half an hour the race officer wisely abandoned and sent us all ashore. It looked like we all had a 1 mile paddle or pump to get back but the rescue boats towed most boats home.

After packing up in the sunshine we all had pie and beans which was included in the entry fee followed by some tasty home baked cakes. All part of the excellent hospitality we received from St Mary's Loch SC.

With only two races sailed there was no discard and consistency clearly counted a lot in the tricky conditions. Kevan and Hamish both had 6 points, settled in favour of Kevan with his 2nd in the first race. Stuart and Ross both had 8 points but Stuart took third with his win in the second race. The latest lucky recipients of the HD T shirts were presented with their awards.

The next event in the HD Sails Scottish series will be at Helensburgh SC on the West coast. This incorporates the Ben Ledi trophy which allows no discards so once again consistency will be key.